Fractures of the upper limb are one of the most common causes of injury, especially in the pediatric population. Except in special cases, treatment for compound fractures affecting the wrist and forearm area involves immobilization of the limb in a position that ensures proper bone healing. The period of immobilization can even last a few weeks in the case of more complex fractures.

Clinical practice commonly involves the use of a plaster brace made in the emergency room at the time of fracture identification. The structure is made by superimposing plaster-soaked bandages applied holding the arm in the immobilization position. This procedure allows the realization of a very economical support, which adapts well to the specific geometry of each patient’s arm and is characterized by adequate strength and robustness. However, this methodology also has some defects, which are particularly important in pediatrics: the plaster is bulky, heavy, cannot be wet, is unhygienic and can only be opened by breaking it. This last element, in particular, limits the ability to control the evolution of healing accurately.

The T3DDY laboratory team has developed an alternative methodology that involves making plastic casts modeled directly from the patient’s anatomy. The entire process is made possible by the integration of three-dimensional scanning technologies and additive manufacturing. The procedure consists of three main steps: 1) Acquisition 2) Modelling 3) Manufacturing. 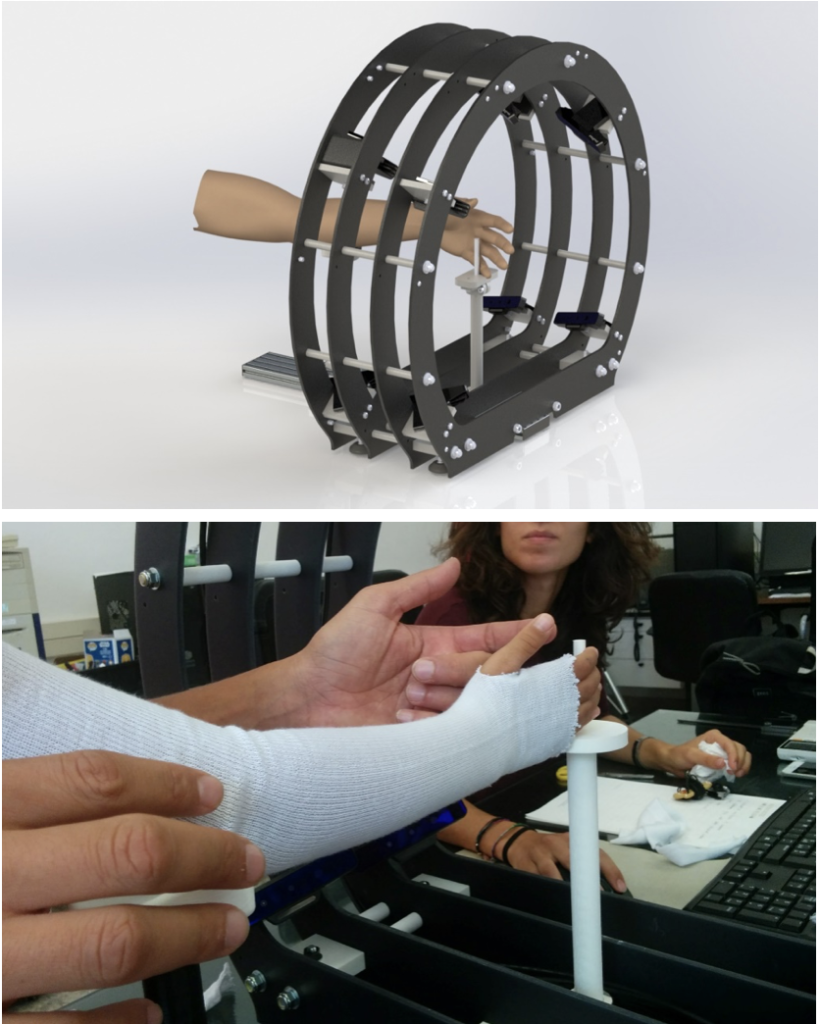 Thanks to the realization of a 3D scanner, called “Oplà”, specifically conceived and designed for this application (Figure 2), the entire anatomical district of interest can be acquired. The scanner is characterized by a circular structure inside which the patient can insert their arm using special supports. The acquisition is performed by 8 RGB-D chambers capable of acquiring the entire arm in about 2.5 s. The very short time represents an important achievement for the application of the entire procedure and for the adoption of the same, in the future, in the hospital environment. The scanner is able to acquire arms with lengths ranging from 200 to 410 mm, dimensions that correspond to the 5th percentile of a 4-year-old child and the 95th percentile of a 16-year-old boy. 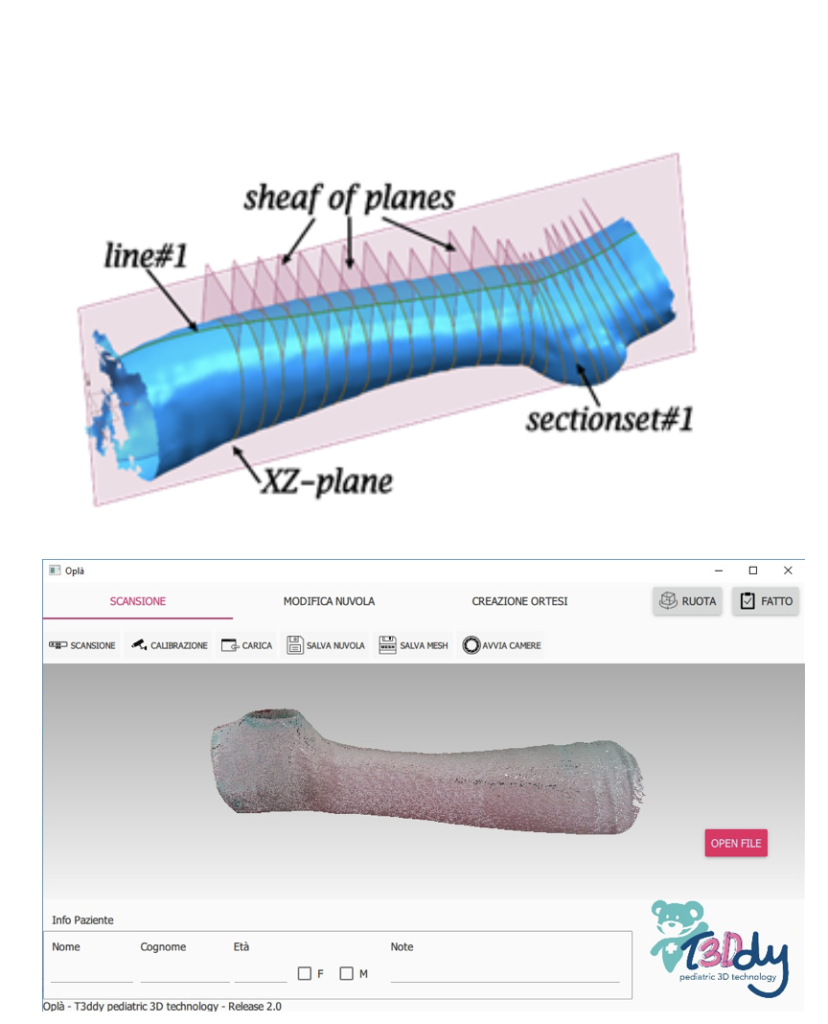 The data acquired by the scanner is processed within a semi-automatic software developed by the laboratory. The software is also responsible for the acquisition and dialogues directly with the scanner to ensure perfect integration between all phases of the process.

The 3D point cloud provided by the scanner is used as the basis for a series of CAD operations leading to the creation of a parametric CAD model of the orthosis specifically designed for the patient’s limb geometry. The model generated will take into account the position in which the arm was scanned (like a traditional plaster cast, this position will be taken as a reference for therapy). 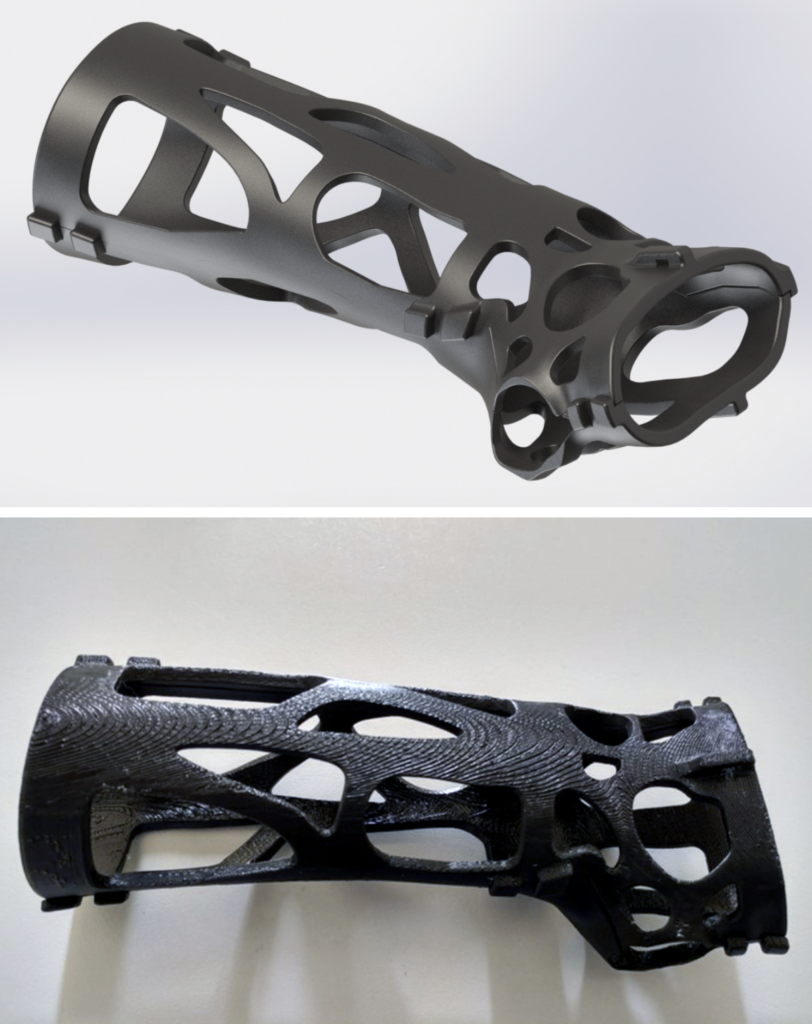 Manufacturing is completed using fused deposition modeling (FDM) 3D printing technology. The process allows the realization of pieces of complex geometry and is well suited to the type of geometry produced by the modeling phase. The FDM process offers high production flexibility and low set-up times, which are essential to produce the orthosis in a short time, compatible with hospital practice and comparable to the current standard.

The model follows a set of implicit rules, imposed during the modeling phase, that ensure that each generated orthosis complies with the design specifications. The generated orthosis consists of two halves that allow the first application on the patient and possible opening during therapy control. A set of weight-lightening holes increases the breathability of the orthosis, makes therapy more comfortable and allows for the opening of compression-sensitive areas.